2014 was a banner year for WebGL and my wallet. The consulting business took off and I even started seeing royalty checks from my O’Reilly Books (beer money FTW)!

So with the tax year end looming, I thought I should take a few more write-offs. I decided to drop serious coin on VR hardware, including a ridiculously powerful new Windows laptop (derp) that is only slightly smaller than my Prius, and a Samsung Gear VR with a companion Galaxy Note 4 phone that I would otherwise have zero use for. ($1000 dollars – cheap!) I made these purchases with some reservation – after all, I am Mr. DIYVR, and I’ve been quite vocal about the need for devices that anybody can afford. Well, right now I can afford ’em, so – there it is.

I had seen a few early demos of Gear VR and was pretty impressed. But I wasn’t prepared for how much I was going to love the retail version. Here’s me in our kitchen, enjoying my first postprandial trip through this mobile version of the Oculus Rift. Somewhat surprisingly, I kept my dinner down just fine. No motion sickness to speak of. And I stayed in there longer than I have ever stuck around in a Rift, playing games, flying through space and watching movie trailers. 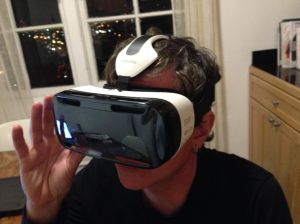 Design-wise, I know, I know: I’m just another White Guy Wearin’ a Rift.  But this thing is way more sleek than that bucket they call the DK2. And look Ma: no wires.

But this isn’t the important part. It’s what’s inside that counts. Instead of blindly groping for a keyboard, or wildly waving my arms in front of me, I simply tapped the touch pad on the side of the headset to interact with the games and apps. Instead of continually removing the device to select a new game to launch, I merely swiped the touch pad to move through a gorgeous interface they’re calling the Oculus Store. It’s simple and beautiful, like the Xbox interface but in full 3D:

Now this is the shit. I need to make the interface to Third Eye as good as this – but for browsing the whole web. So that’s my new mission. Wish me luck D-)

In the meantime, kudos to Samsung and Oculus on making the first high-production, consumer-ready VR for realz. If they can get the price down, then we’ve really got something. This fab device is, well, “it’s gear.”

View all posts by tparisi

One thought on “Fab Gear!”